This win keeps CBR in Pro B!!! 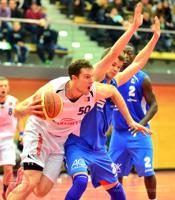 With this win we have guaranteed or staying the the Pro B. The reason this is the case is that the ruling on the Magdeburg license was made on April 9th. They ruled that they would lose their license and that only 3 teams between the North and South Pro B Playdowns would be sent down. The 3 teams with the least amount of points, since the Pro B South has 2 really bad teams they are guaranteed to move down and only the bottom team of the Pro B North Playdowns will move down and with this win we guarantee that it will be Stahnsdorf.

We still need to win this next game against Itzehoe in case any of the decisions made are successfully disputed. This win will put us in 1st or 2nd, depending if Herten wins.

This Stahnsdorf game was a battle from the beginning. The other team had some injuries to their post players leaving them only 1 main post player in game shape. We got him in foul trouble early and I had my way with the them the rest of the game. This game was still a struggle as we had rough 1st and 3rd quarters and didn't shoot that well. But we pulled out the win and that is the most important thing.  I had 25 and 18.